In 1991-06-25, Slovenia and Croatia declared independence of Yugoslavia initiating the dissolution of Yugoslavia. Over the course of the next 10 years, many related wars emerged in Ex-Yugoslavian republics. Austria was on the border of these conflicts. Many friends in elementary school were refugees of these wars and my generation grew up with them.

30 years after the independence declaration, Austrian national broadcast is featuring plenty of related documentaries and the movie “Quo Vadis, Aida?” was released in Austrian cinemas. It specifically discusses the war crime with the highest death toll (namely, 8,000–39,000) since World War 2.

Since I discussed the Balkan situation privately in more detail one year ago, I was interested in the movie and bought a cinema ticket on the premiere date. 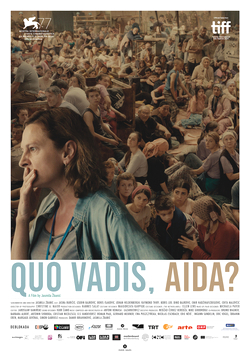 Figure 1. Poster of the movie

Jasmila Žbanić is the director of this 2020 Bosnian war movie. It was funded by several European countries. Here is my summary:

Aida is working as a translator for the UN. She is designated to the UN safe zone Srebrenica and helps UN colonel Thom Karremans with communication duties. As the Army of Republika Srpska (VRS) under command of Ratko Mladić approaches Srebrenica and attacks civilian buildings, the UN is late to react to the events and refugees flee to the nearby UN camp (some fleeing into the woods).

Overwhelmed with the large crowd of refugees, Karremans has to make difficult decisions to control the situation and cannot secure most refugees. Resources become scarce and UN troops are outnumbered. In particular, Karremans (under higher command) lets Mladić’s troops enter the refugee camp to verify that no armed soldier are inside the camp. Aida simultaneously fights for her family which is part of the crowd. Civilian representatives negotiate with Mladić and Mladić gains access to the civilians by claiming to transport them to a safe city under UN supervision. However, women and children are separated from their men. Following signs of war crimes (ignored by the UN troops) outside the camp, the threat to transported men becomes obvious. Aida fights for her two sons and her husband.

The Bosniak men are transported without UN supervision to a building in an abandoned city and get massacred. Years later, Aida returns to her job as a primary school teacher.

The movie following the plot of “Under the UN Flag” claims to be based on true events with dramaturgic sequences where documentation is missing. Since the plot is strongly linked to Aida’s perspective and interests, it is certainly a movie and not a documentary.

In an interview, Jasmila Žbanić believes that “movies can help to cure traumata by talking about what happened and she hopes her film shows how narrow the gap between humanism and barbarism is and in particular she hopes for sympathy with the survivors of the massacre. In my opinion: Mission accomplished!

A very good movie conjuring strong emotions. I learned that the definition of genocide does not imply murder only, but can also occur when a group is prevented to give birth to descendants.